Unless something very exciting happening this is the last blog. It's been a blast restoring the cart and a blast writing about it. I hope that you enjoyed reading about my little adventure.

I continue to drive the Little F***ker as she is affectionately known around the community in order to shake out any problems before I take her to the mountain. I was about a half mile from home when she just quit. A look around the engine showed that the fuel filter was empty so my first thought was that the new fuel pump that I had fitted yesterday had gone on the fritz. So I walked home got Susie and the Yukon and towed her home hoping that none of the neighbors would spot my shame.
As a shot in the dark I thought maybe a vapor lock so I took the fuel line off and squirted a shot of fuel in only to watch it shoot out of the pipe some 12 inches down the line. It turns out that when I had fitted the new pump I forgot to clip the fuel line in place and it had sagged onto the driven clutch which had then cut a hole in the pipe.
Perhaps I should blame this one on the mechanic not the cart.
No comments:

I hope that this isn't the start of things to come but I may now be keeping a blog about failures. I have 1.9 hours on the engine and the first breakdown.

This morning I staggered downstairs and the lower I got the more I could smell gasoline. Eventually I got to the kitchen and it really was quite overpowering. The culprits were going to be the 63 Galaxie, the 2009 Soltice or the cart. Hoping that a kitten may have accidentally opened a can of gas and then tipped it over I ventured into the garage and found a puddle of gas under the cart. A quick look and it was clear that the gas was leaking from, of all places, the exhaust manifold. This as you can imagine was quite confusing but by a process of elimination (thank you Sir Arthur Conan Doyle) I worked out that it has to be a split diaphragm in the fuel pump. Casting caution and my wallet to the wind I drove to Martinsville and picked up a new pump. It is about the only part that I have not replaced so what the hell. Of course with the new pump fitted I had to check out the old one and here it is. 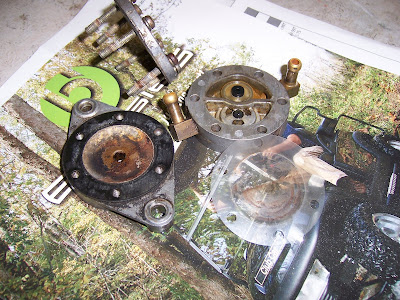 The diaphragm (steady girls) is bottom right and if you squint your eyes you can just see the crack. Now I don't know if it's all psychosomatic but the little buggy seems to be flying with the new pump, maybe the leak was causing it to run too rich, we will see.

Actually the cart now has a name. It is called the Little F***ker. This derives from Susie saying get that little f***ker out into the yard. Now you might think that was a little uncalled for but she then proceeded to toss her cookies down the powder room. Personally I find the smell of gasoline (and Hoppes No.9 ) an aphrodisiac and I kind of figured with her bent over the bog it might be a good time to plight my troth but you know what, Monday mornings are painful enough without the unpleasantness of a spot of humpty dumpty getting in the way.

And there she is

There are still a couple of things to tidy up and I need to fabricate the uprights for the roof but essentially she is done! 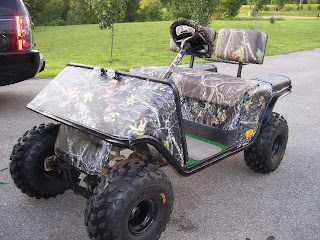 Even though I say so myself she isn't too shabby. It took nearly 3 evenings to get the trim back on and I now see why later carts don't have rubber trim. 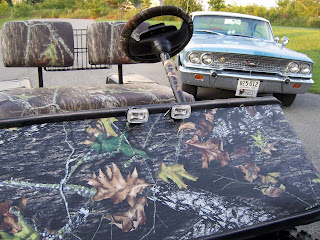 Check out the headlights. They may be tiny but that's 110 watts there so even when totally in the arms of Bacchus I should see my way home. 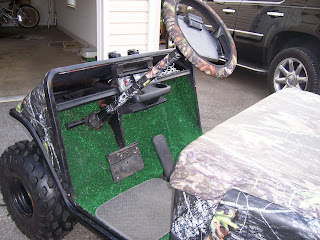 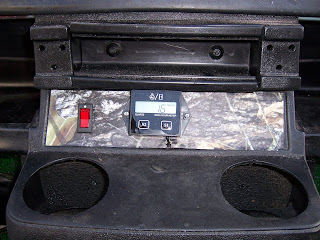 In the center is the engine hours counter which when the engine is running is also a rev counter. On the left is the light switch. 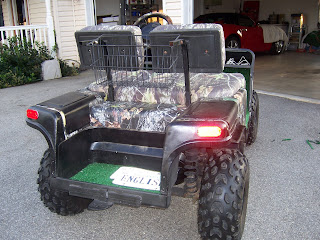 A space for the cooler and a basket for the empties and new reflectors for safety. 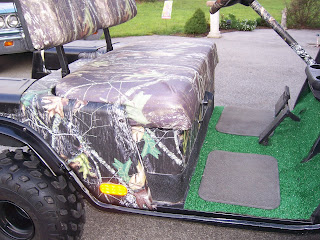 I still have to fix the very wayward steering but I found a new rack and pinion for just under $100 which is a lot better than $600 for the complete assembly. So fix the steering, put on the roof and then find a new project.

God how I love this shit.

As you can see, the body is wrapped and it all went rather well. There really isn't anything interesting to write about here so why don't you just look at the pictures. 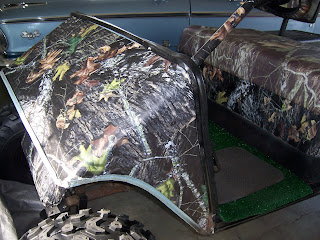 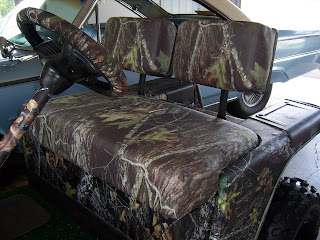 I even had enough left over to wrap the steering column. 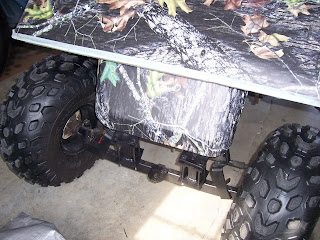 and the splash plate. 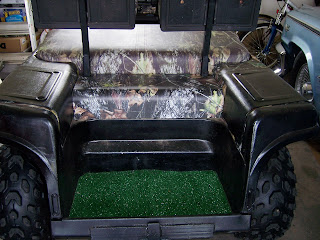 So to finish up I have to replace the rubber trim, trim out the astroturf and install the headlights.
Then the final job will be to fabricate some roof supports and install the roof and we are done !
No comments: 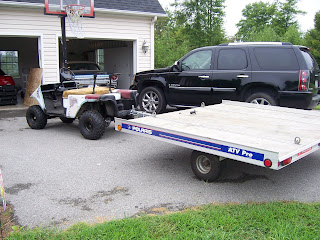 It was now time to restore the seats and the first item on the agenda was to buy some wood for the seat and the seat backs. Although I didn't need an 8 x 4 sheet I knew I was going to be buying one and I knew it wouldn't fit into the SUV. I also knew that dragging the trailer up from the bottom of the yard was going to be tedious and wet. Then in a flash of inspiration I thought "Bonjour mon amis, I have a buggy, why not use it to haul the trailer". Here you can see the cart now earning its keep and saving my back, isn't that neat?


Now with staples in hand along with foam and batting and new wood and aerosol contact adhesive we went to work. For once I am not using the "Royal" we as I discovered when working on the Galaxie, Susie is actually pretty good at upholstery. It took all day and of course multiple trips to Lowes but you don't need to hear all that, you lucky people can just look at the pictures. It actually all went rather well as you can see. 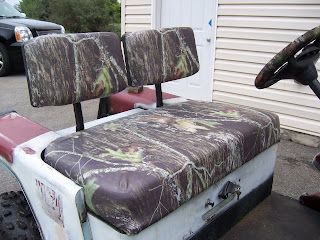 and check out the matching steering wheel cover. 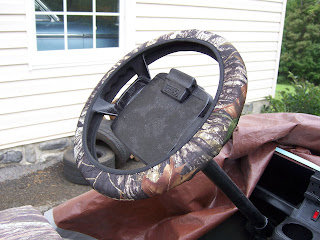 The floor of the cart was originally a fitted rubber mat but some time ago my old buddy JC Terry thought that if I were to wrap the cart in camouflage then maybe I should replace the worn out rubber with astroturf and here is the result. 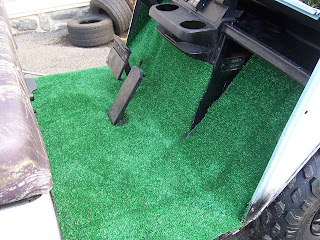 I still need to glue it down and trim out the edges but I think that it is all going to look rather jolly when it is done. The next big leap forward will be to vinyl wrap the body and that is dependant on Everything Carts actually delivering the product that I ordered (and paid for) weeks ago. Still all in all some serious progress has been made this weekend.
No comments:

There really isn't too much European that I would hold up as shining examples of culture to the rest of the world. Of course it goes without saying that the National Health Service is the jewel in the crown of the Empire but I would also ask you to consider the British Standards Authority whose work has make the life of generations just a little easier.

When I first came to this country I must confess to a certain degree of bemusement as to how hard you made life for yourselves. Take plumbing for example. Now in Europe a fitting is a fitting, you want a P trap, then go and buy one. Yet in the good old US of I have never been able to complete a plumbing job without multiple visits to the Homo Despot. I have lost count of the times that I have carted a complete bath behind me in order to purchase the necessary 3/4 fine tread to 5/8 coarse reducer with a left hand thread to adapt a Kohler faucet to a Standard trap.

As another example let us consider towing hitches and balls. In Europe the ball is 50 mm (or 2 inches to you). Now I don't care what size our balls are but for the love of God make the bastards the same size. I have three trailers and I have three different size hitches, so pray tell me if you can, who the intercourse does this benefit? Certainly not me, in fact I run the risk of, in a moments inattention, of connecting my 2 inch trailer to my 1 7/8 hitch and sending $8000 worth of ATVs hurtling across I581 at 65mph.

You think I exaggerate? Let us consider ammunition. Now you people invented guns and bullets and all that stuff so you would think it would be all so simple and yet....... A 22 calibre mini mag will fit into my PD351 and it will fire and the case will jam in the revolver because it is too small so when you fire it the case splits and makes me cry. I can successfully use a 22 long rifle round but if I am stupid enough to use a long rifle round in my long rifle it falls out of the magazine because the rifle needs a 22 magnum round. It's a 22 calibre round for Christ's sake, the damn thing is supposed to be 0.22 of an inch in diameter, not 0.221 (minimag) or 0.222 (LR) or 0.223 (Magnum).

So it came to pass that I was finally ready to re-upholster the cart seats. Everything was set except that I had run out of staples. Two staple guns and a packet of staples that were clearly not designed to go in either. Bearing in mind everything I have said above and having learned my lesson (537 times) I carefully read on the side of the gun "Use Stanley 3/8 staples or Arrow 3/8 only". Off I troll to our local Lowes and buy my box of 3/8 Arrow staples and I get home and they don't fit. The damned worthless stinking staples don't damn well fit. Now do you get my point? Arrow make wide crown staples and do you know why? So that you and I give up and buy a gun with staples included. Well it didn't work once I realized that you can't hammer staples into particle board I made another trip to Lowes and with my blood pressure at 240 / 120 and my staple gun in hand I ripped open boxes until I found staples that physically fitted into the gun.

People of America I wave my genitals in your face until you form a National Standards Authority with the power to stop the nonsense. Oh and by the way steady as you go in aisle 13 there are staples everywhere.
No comments: